The information that follows is based on a video taped interview with Regency co-founder John R. Pies on May 12, 1991 and conversations since that time. Additional reference information has been added for continuity. 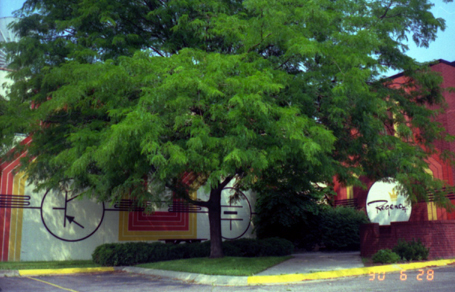 W.W. II had just ended. RCA employees Joe Weaver and John Pies were to be transferred with their engineering group to Camden, New Jersey. John was recovering from a collapsed lung and received a visit from Joe. The visit led to a mutual decision to quit RCA and start their own engineering consulting partnership company with the name I.D.E.A., Industrial Development Engineering Associates in Indianapolis.

Ed Tudor was hired in 1946 to stimulate markets for IDEA and became president, along with radio designer George Fathauer. On July 18, 1947, the company formally became a corporation. The group designed and built several products for midwest firms through the late 1940's and finally started marketing their own creations. These products included voltage signal boosters for countries using substandard voltage, resistors producted under I.D.E.A.'s Radell Division and a television set. After building ten working television sets in 1950, the project was dropped because I.D.E.A. was not competitive against large companies like RCA. On the other hand, TV reception was generally poor in rural areas and this led to the company's first big money maker, a TV signal booster. The success of the TV booster product line thrived when Sears contracted I.D.E.A. to build signal boosters under the Sears' "Silvertone" label.

Electronics seemed to be the future of the company but the name Industrial Development Engineering Associates sounded too much like a construction building contractor. One day during a meeting to discuss the company name, Ed Tudor sat fiddling with a pack of cigarettes that had a brand name called either Regent or Regency. Ed thought the regal name sounded classy and this prompted the beginning of the Regency Division. 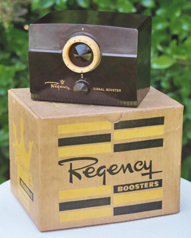 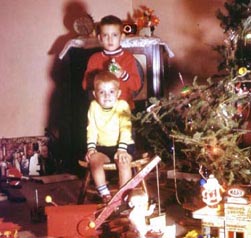 Vacuum tubes were king. Bell Labs' 1947 transistor invention (later to earn the Nobel Prize in 1956) was not taken seriously by the major radio manufacturers. Frequency response and power limitations were considered inherent show stoppers for the novel transistor. The up and coming transistor developer, Texas Instruments, needed to get transistors into the market place, but established electronics companies RCA, Sylvania and Philco did not take the bait. Regency had the vision and radio expertise, and TI had the transistor and financial backing. In early July 1954, the engineering and development of the TR-1 began at Regency.

TI also had a transistor radio circuit which Regency found not practical for the commercial market since the design required manually selecting matched components to make the radio operate. The Smithsonian displays TI's early prototype in its machined case. The prototype Regency TR-1 radios also used machined cases which had the same appearance as the molded cases used in the final production design. Nevertheless, cost per unit was prohibitive for the consumer market with the TI circuit design. Commercialized use of the transistor was still at bay.

VIDEO INTERVIEW: John Pies describes Regency entering the transistor radio business 7:08 minutes (note: the actual price of the Regency TR-1 was $49.95, not $59.95 mentioned in this interview)

The Door is Unlocked 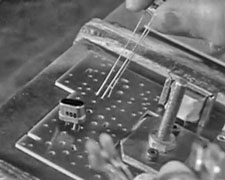 Regency's master engineer, Dick Koch (pronounced 'coke'), developed the key circuit design that put the radio on the market. His circuit allowed the tolerance of production run components to be directly soldered into boards without manual selection. Regency patented the historic design of the Regency TR-1 radio with specific details given all the way down to the electrical value of each component (patent number 2,892,931, submitted in 1955 and issued by the U.S. Patent Office in 1959). This design is discussed in great detail in an article titled "The Revolution in Your Pocket" by Robert Simcoe in the 2004 fall issue of AMERICAN HERITAGE's INVENTION & TECHNOLOGY (vol. 20, #2). In this article, Simcoe further notes that the TR-1 triggered the miniature discrete components market, and its compact design brought the first widely used application of printed circuit boards into commercial products. 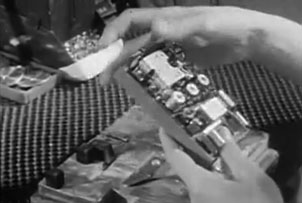 In mid-1955 the National Association of Manufacturers recognized the importance of Regency's achievement by producing a film featuring the production facilities used to manufacture the TR-1. The film also credits the numerous suppliers that Regency contracted to create the minature components necessary for this pocket sized radio.

Texas Instruments was not satisfied - TI wanted to claim the radio design was completely theirs. Regency owed TI a large sum of money and was encouraged to reduce that debt by selling the ownership of the patent for $25,000. TI president Erik Jonsson was personally involved with the negotiations to clear the Regency patent. Frank Mascarich, a Western Electric Patent Office attorney, was assigned to the job. Jonsson later told Regency's John Pies that his heart sank when Mascarich walked into the kick-off meeting. Mascarich looked at Jonsson and revealed "I know you, you are the guy who refused to hire me when I first got out of college." 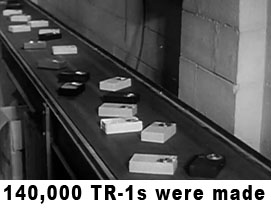 John Pies recalls that the October 1954 release of the Regency TR-1 missed a fair amount of Christmas sales since the production capacity was below the demand. The $49.95 tag may sound high for 1954 money, but it turned out to be a well targeted price many consumers would pay. On the other hand, profit margin was still so low that Regency struggled to keep going.

A Japanese company got wind of the business potential and entered the transistor radio business in September of 1955 with its own picnic portable radio, the TR-55. This led to the company's first big product success, and later, a domination of the miniature electronics industry. It's name was finally changed so Americans could pronounce it. The new name became Sony. Pies chuckles when recalling Sony's sales ploy after they announced release of the Sony TR-63 shirt pocket radio in 1957, stating "...so then they (Sony) came out and said we've made the smallest transistorized radio in the world, it'll fit in your shirt pocket, and then they equipped all their salesmen with shirts which had oversized pockets."

It should be further noted for the historical record that Sony's leaders created a deceptive myth in the 1970s and 80s that they had invented the first transistor radio; and shoddy reporting by CBS ("60 Minutes" show), NBC ("Today" show) and the BBC (spotlight show titled "Nippon") helped perpetuate that myth [click to read supporting background]…Sony history records have since corrected this misdirection.

In The Portable Radio in American Life, Michael Brian Schiffer writes "The importance of the TR-1 in stimulating demand for transistors was especially clear at IBM. Thomas J. Watson, Jr., head of IBM, bought several hundred of the new sets. Not only did he give TR-1s to various IBM executives, but he used them to goad his engineers into building computers with transistors. Comfortable with the familiar tube circuits, computer people had been reluctant to embrace the new technology. An impatient Watson finally ordered that IBM build no more machines with tubes after June 1, 1958. Whenever engineers complained about the decision to Watson, he just gave them a TR-1."

In the closing of Schiffer's book is written "It calls to mind the heroic efforts of Texas Instruments and I.D.E.A. to produce rapidly and market the world's first transistor radio. The achievement of the Regency TR-1 exemplifies what American engineers can accomplish under high pressure through teamwork."

John Pies (pronounced 'peas') graduated from Rose Polytechnic Institute (now called Rose-Hulman Institue of Technology) in Electrical Engineering in 1939, and finally retired from the electronics industry at 81 years old. He spent the final years of his career at MicroFab Technologies near Dallas, where he was named on 10 patent awards.

In 2001, he shared residence at the same Dallas care facility as transistor pioneer Gordon Teal. Teal had worked at Bell Labs with the original Bardeen, Brattain, Shockley transistor group, and then directed Texas Insturments' transistor research department in 1952. Shortly before reaching his 87th birthday, John Pies passed away on January 4, 2004.

The engineering interests continued within John Pies' family: his elder son, Dennis, designed and built lymphatic therapy instruments using Dennis' own circuit and optics designs under the Sky-David label; his younger son, Don, earned mechanical engineering degrees from both Texas Tech University and Ohio State University, and specialized his career designing and building telescope/optical systems riding on satellites; and his grandson, Matt (seen in the background in the Pies' video interview above), graduated from U.C. Berkeley in mechanical engineering and with a minor in software engineering.

Japanese Competition Squeezed Regency Out of the Portable Radio Business in the Early 1960's
Regency sadly conceded from the portable radio business as recorded in the following announcement in a 1961 stock prospectus: "In the course of the development of its transistor radios the Company was granted three patents covering transistor circuitry. Though these patents were subsequently assigned to Texas Instruments, Inc., the Company reserved the right to use such patents and to grant licenses to certain foreign corporations. It is believed that circuitry contained in a majority of the transistor radios shipped into this country by the Japanese infringe upon these patents. Steps have been taken to recover damages as a result of this alleged infringement and settlement negotiations have been commenced. Since the appearance of the Japanese transistor radios in the United States the market for the Company's models has steadily decreased. The severe price competition brought about by the Japanese imports has compelled the Company to gradually withdraw from the production of consumer transistor radios."

Regency's Business Grew Despite the Competition
Regency shifted its market direction and sales exceeded fifty-million dollars in 1980. The company went through a number of confusing name changes. Here is a timetable of some of the company's names and organizations: