"......Regency president Ed Tudor figured out that with the cold war going on at the time, and with the fear of a nuclear attack (A.K.A. "The Bomb") from USSR, the transistor radio was going to become an essential life survival item. He projected sales of at least 20 million sets in three years" ref: Enrico Tedeschi, UK radio historian

Should a nuclear attack hit your neighborhood, simply 'Duck and Cover'

View How to DUCK & COVER. Then, with your Regency radio in hand, tune-in to one of the Civil Defense stations designated by the tiny triangles at either 640 or 1240 kHz on the tuning dial. As stated in the owner's manual, "In event of an enemy attack, your Regency TR-1 will become one of your most valued possessions."

View nuclear survival training clip from PBS History Detectives episode where it was stated "In a nuclear attack, keep tuned to your local radio station - it will keep you posted where fallout is taking place". 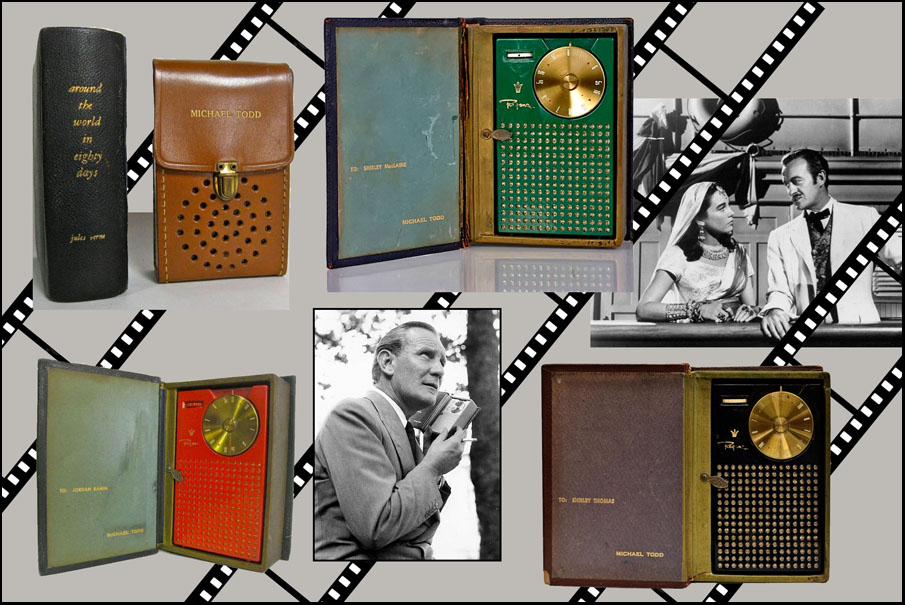 Jordan Ramin, friend of Todd, relays an interesting story that occured during Elizabeth Taylor's difficult time after Todd's fatal accident - "Mr. Ramin went over to their apartment where Liz Taylor was in a rage '...throwing things around.' He asked if he could have Mr. Todd's radio, Ms Taylor threw it at him, it hit a wall near his head. She screamed 'Take it you're a schmuck!' Mr. Ramin picked up the radio and ran out. Taking his new radio." web reference

2005 DreamWorks movie "The Ring Two": The Daily Astorian newsroom hears the police report on a Regency ACT-E-106 scanner about the fate of "The Ring's" next victim. Naomi Watts on the far right, follows-up with the investigation (Watts was also the female lead in "King Kong" in the same year). 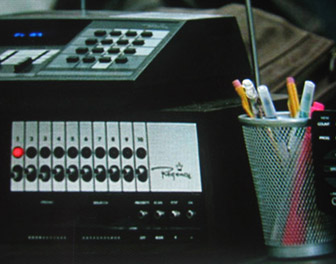 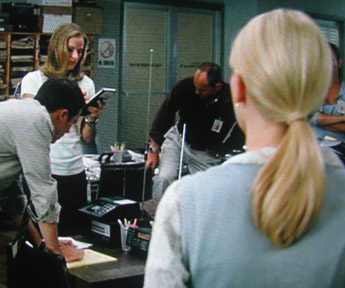 2017 & 2019 THE CROWN - Netflix: This Regency TR-1 was used as a prop in Netflix “The Crown, Misadventure” - 2017 Episode 1, Season 2, at 8:47 minutes, to capture the dramatic announcement when Egypt gained control of the Suez Canal from England in 1956. CLICK image to view fullsize with timeline bar. In 2019, a Regency TR-1 was also used as a prop in Season 3, Episode 3, titled "Aberfan" in a newsflash following a tragic accident at a Welsh mining village.

"It's Only Rock 'n Roll, but I Like It"
The Stones 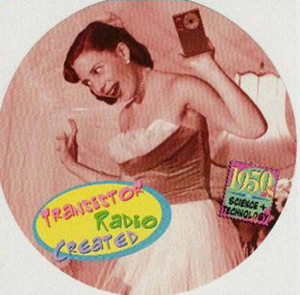 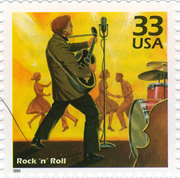 The portable transistor radio is credited with advancing rock 'n roll into the American culture. Quote PBS program, TRANSISTORIZED "Now that kids could listen to music out of earshot of their disapproving parents, music became more daring and revolutionary." The timing was right, and in 1954, Bill Haley's Shake, Rattle and Roll and soon to follow, Rock Around the Clock hit the charts, along with Elvis' first record, That's All Right Mama. Sixty years later in 2014, Cari Romm writes for the SMITHSONIAN "...the transistor radio with music for your pocket fueled a teenage social revolution."

But this success was something that the transistor radio inventors had not anticipated nor were pleased about. When Regency co-founder John Pies' children became teenagers, it was common to hear "turn that music down" barked at the Pies household. Nobel prize winner (for co-inventing the transistor), Walter Brattain, complained that his only regret for inventing the transistor was that it stimulated rock and roll.

In 2012, The PBS History Detectives searched for the oldest Regency TR-1 still in existence. CLICK to view more details about this episode.

VIEW excerpt from this episode when Elvis Presley's 1954 radio debut and the Regency TR-1's release hit at the same moment, noting "out of range of their parents, teenagers could listen to the new music".

In 2021, Bruce Springsteen talked about his personal transistor radio on SiriusXM satellite radio, E Street Radio channel. Springsteen began by describing how essential the transistor radio was to him in his musically formative years. “The power and importance of my radio could not be overstated, I lived with it, tucked it in my schoolbag during the day, and tucked it beneath my pillow all hours of the night.“

Springsteen continued by stating "The transistor [radio] was your only connection to the rocking, swinging sounds and culture that was teenagedom in the greater world, in the ’50s and ’60s.” His SiriusXM radio show highlighted numerous songs by various artists where references to radios were part of the lyrics, including Springsteen's "Radio Nowhere"...a song you'll want to turn-up. The image with Springsteen singing in duet was taken from a recording of this song and posted on YouTube.

View the program with Bruce Springsteen on SiriusXM satellite radio - May 26, 2021

"TRANSISTORIZED", sponsored by PBS. An intriguing one-hour TV special hosted by Newton's Apple Ira Flatow, covering the transistor radio's impact on rock & roll and introduction to the information age; and how the Regency TR-1 beat Sony to be the first on the market. CLICK to view more info about TRANSISTORIZED

CLICK to view video excerpt from TRANSISTORIZED that stated "Now that kids could listen to music out of earshot of their disapproving parents, music became more daring and revolutionary". 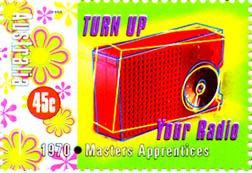 In 1998, the Australian Post issued a series of stamps to commemorate Rock 'n Roll songs of the 50s, 60s and 70s. The Regency TR-1 was illustrated on a stamp that featured the 1970 hit "Turn Up Your Radio" by the group Masters Apprentices. The song was considered one of the great Australian rock anthems. The radio was supplied from the collection at The Museum of Applied Arts and Sciences in Sydney. information provided by Bruce Barnett

While the Regency TR-1 amped up rock 'n roll in 1954, another product hit the market in the same year for those creating the music...the Fender Stratocaster guitar.  The iconic 'Strat' was pushed into fame by artists such as Eric Clapton, Jimi Hendrix, Buddy Holly and others.  The Jensen speaker company had already built speakers for Fender amplifiers in the early 1950s; and in '54, Jensen developed the tiny speaker that went into the TR-1.


The chic gadget magazine, T3, published a montage of hot gadgets in 1954 that included the Strat and the Regency TR-1. CLICK to view the full-sized illustration and the magazine cover.

The two-tone '58 Strat in the photo (serial # 025705) to the right was purchased by Regency co-founder, John Pies, in the mid-'60s, and given to his son. Pies' personal TR-1 is shown sitting on the amp. CLICK photo to enlarge. 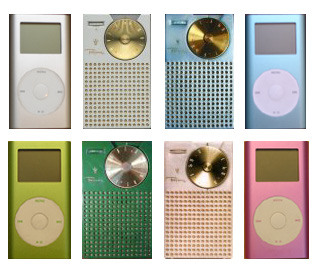 BBC's John Ousby caused quite a stir in 2005 when he posted this picture on the internet. Quickly, accusations were made that Apple had based the iPod design on the TR-1. But in reality, it's highly unlikely this claim merited any truth. What was likely was that both Apple and Regency based their design successes on the proven principle of 'Simple Elegance' and not flashy trim. CLICK to view the BBC News piece covering this controversy.

For the record: In 1954, Regency hired the Chicago firm, Painter, Teague and Petertil, to design the plastic case for the TR-1, which was fabricated by Argus Plastics in Indianapolis.

Amazon.com offered vintage transistor radio plastic cases for the iPhone 5 and Samsung Galaxy S4 displaying the Regency TR-1. When the iPhone 5 was released, it was approximately the same height as the TR-1 as shown here; and when future smart phones were introduced, they grew even taller as demonstrated by this custom case on a Google Pixel2. The invention of integrated circuits in the 1960s (Texas Instruments and others) allowed new technologies to develop, leading to advanced miniaturization and thin phones today. 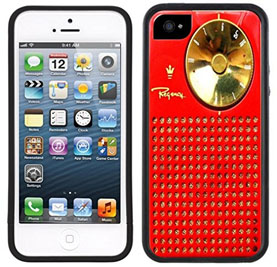 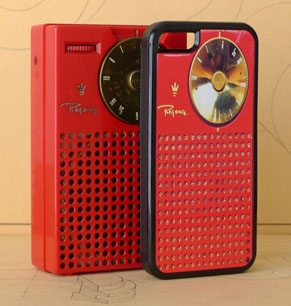 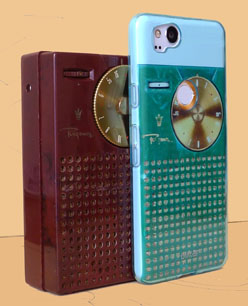 Much has been written about the origin of the transistor - was it humans, or was it space aliens? Here are some keywords to continue the search.

What were the Visionary Companies Doing at the Birth of the Transistor in 1947?